Dieter Moebius Dieter Moebius is best known as being one half of Cluster, the trailblazing German duo which rose from the ashes of Kluster, a group formed by Conrad Schnitzler in Berlin in the late 1960s. Moebius was also one-third of Harmonia – a band once hailed by Brian Eno as the ‘world’s most important rock group’ – with Hans-Joachim Roedelius, the other half of Cluster, and Michael Rother of Neu! Moebius’ tremendous and immensely varied body of work spans over four decades, including solo work and high-profile collaborations with Eno, Rother, the legendary producer Conny Plank, the drummer Mani Neumeier, and many more.

Moebius’ fruitful partnership with Roedelius in Cluster continued for nearly 40 years until the band dissolved in 2010. Moebius is now concentrating on his own solo work, film scores, and various collaborations – including a recent tour of Australia with Rother and Hans Lampe (of La Dusseldorf) in Rother’s Hallogallo project, and a new album with Asmus Tietchens.

Moebius has always been interested in handmade rhythms and the use of electronic, eccentric, and unpredictable machine noises. His unique solo works and his collaborations with Plank, Beerbohm, Neumeier, and Renziehausen illustrate his passion for strange sounds.

Moebius has toured extensively through Japan, South America, Europe, Australia, and the U.S. as part of Cluster and in his various collaborations. This rare and very special SFEMF appearance marks his first-ever solo tour in the United States. 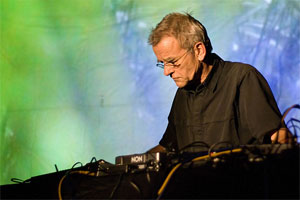