The compositional and intellectual wisdom of Milton Babbitt influenced a wide range of contemporary musicians. His broad array of distinguished musical achievements in the dodecaphonic system and important writings on the subject generated increased understanding and integration of serialist language into the eclectic musical styles of the late 20th century. Babbitt was also renowned for his great talent and instinct for jazz and his astonishing command of American popular music. His All Set, for jazz ensemble, reveals an extraordinary compositional flexibility, uniquely American and vintage Babbitt. Babbitt, born on 10 May 1916 in Philadelphia, studied composition privately with Roger Sessions. He earned degrees from New York and Princeton Universities and was awarded honorary degrees from Middlebury College, Swarthmore College, New York University, the New England Conservatory, University of Glasgow, and Northwestern University. He taught at Princeton and The Juilliard School. An extensive catalogue of works for multiple combinations of instruments and voice along with his pioneering achievements in synthesized sound made Babbitt one of the most celebrated of 20th-century composers. He was a founder and member of the Committee of Direction for the Electronic Music Center of Columbia-Princeton Universities and a member of the Editorial Board of Perspectives of New Music. The recipient of numerous honors, commissions, and awards, including a MacArthur Fellowship and a Pulitzer Prize Citation for his “life’s work as a distinguished and seminal American composer,” Babbitt was a member of the American Academy of Arts and Letters and a Fellow of the American Academy of Arts and Sciences.

Philomel, a serial composition composed in 1964, combines synthesizer with both live and recorded soprano voice. It is Milton Babbitt’s best-known work and was planned as a piece for performance at the Metropolitan Museum of Art, funded by the Ford Foundation and commissioned for soprano Bethany Beardslee. Babbitt created Philomel in the Columbia-Princeton Electronic Center, of which he was a founding member.

As a tribute to Babbitt, who passed away on January 29, 2011, SFEMF has programmed the work as part of this year’s opening event and enlisted Dina Emerson to perform it. 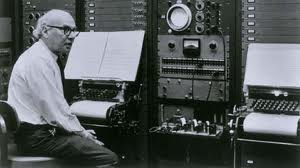