Richard Lerman has created electronic music and interdisciplinary art since the 1960’s offering performances, installations and screenings in North and South America, Asia, Europe, Australia and New Zealand. For 30+ years, his work has often utilized piezo disk and other transducers that he has designed and built. These pick up sounds too quiet for our ears, extending our hearing.

His piece Travelon Gamelon (1978) for amplified bicycles has received hundreds of performances worldwide. In 2009 he completed Death Valley Cycle with video/audio gathered in each of the 12 months at this site. Recent Installations include: Alga-Aqua (2007), in Vigo, Spain and Sao Pedro do Sul, Portugal and Hoover: Water | Power at the ASU Art Museum (Oct 2009 – Feb 2010). In 2008 he performed new work at Roulette in NYC and in 2009 at the Chapel Performance Space for the Wayward Music Series in Seattle. In May 2012 he will premiere a sound/video installation From the Galapagos at cuba-cultur in Münster, Germany, and also install Death Valley Cycle.

Lerman has received fellowships from the Guggenheim Memorial Foundation, the Asian Cultural Council, the Arizona and Massachusetts Arts Councils, the NEA and many others. His films and video work have been screened widely, including seven super 8 films from his Transducer Series Pieces shown at the Museum of Modern Art. In 2007 a 2-CD set of earlier music and audio work, including Travelon Gamelon, was released on EM Records, Osaka, Japan. Since 1994 he has taught at Arizona State University and prior to that taught at the Boston Museum School. 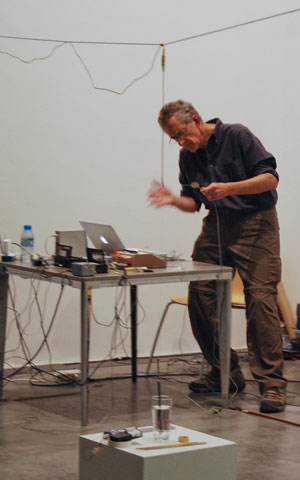