Experimental artist SUZY POLING birthed Pod Blotz in 2002. Poling sound is an interesting cauldron of tape manipulation, organ drones, melodies, electo-acoustic sounds, synthesizers and voice. Pod Blotz is a solo project that is derived from conceptual artistic endeavors and sonic explorations relating to Science Fiction, phenomenon and material reactions. Poling’s sound is all analog is staying true to the lineage of taped sounds made by Stockhausen and Tod Dockstader. She works as an installation and sound artist and also produces a lot of 2 dimensional work in the form of Photography and Collage.

Poling combines light experiments with her sounds where she projects light projections by use of video, film and lenticular lenses. The nature of these occurrences is all based on chance and minimalism that are as spontaneous as the sounds generate with the tape manipulation reactions. She is interested in the regeneration within materials and sound. She works with photography, video, film, video, broken glass, multi dimensional lenses, chemistry and sound to celebrate and elaborate the phenomenon and permanence. 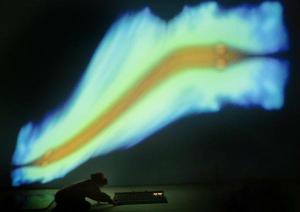