Gen Ken Montgomery is a New York based artist whose involvement in Cassette Culture and Mail Art led to the creation of the Generations Unlimited electronic music label with David Prescott and Conrad Schnitzler in 1987. In 1989 Montgomery opened Generator, the first sound art gallery in New York City. Generator’s wide scope and novel approach toward music made it a vector point for many artists from around the world. Generator was re-created at AVA gallery in 2013 audiovisualarts.org/5973/generator and in 2014 Montgomery re-launched Generations Unlimited with Sean Julian and Chris Penalosa at the Print Shop in MoMA PS1. Since 1985 Gen Ken has performed Conrad Schnitzler’s octophonic Cassette Concerts in total darkness in many venues, including a weekly series at Generator. Montgomery collaborated with Schnitzler to compose multi-channel sound works with sculptural and spatial dimensions under the name GENCON Productions, and continues to create immersive listening experiences. 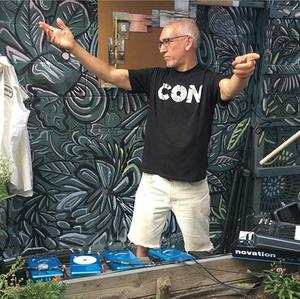