Since 1997, Irene Moon has been presenting musical lectures, films, musical recordings, and theater about insects and other arthropods in an attempt to elevate Entomology (the study of insects) as a rock genre. Irene Moon (a.k.a Dr. Katja C. Seltmann, PhD) is presently the Director of the Cheadle Center for Biodiversity and Ecological Restoration at the University of California Santa Barbara, and a researcher for ten plus years in entomology and data science. She brings the aesthetics from the entomology laboratory in front of alternative audiences (principally art galleries and music venues), in the form of absurd but truly factual performances inspired by insects and her research. Playing upon many of our deep fears and stereotypes about insects, she reconfigures them exposing the factual roots (and misinterpretations) of these myths. 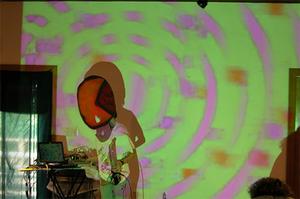