Lucky Dragons is an ongoing collaboration between Los Angeles-based artists Sarah Rara and Luke Fischbeck. Active as a band since 2000, they are known for their participatory approach to making music, radically inclusive live shows, and playful, humanistic use of digital tools. Fischbeck and Rara have presented collaborative work in a wide variety of contexts, including the Whitney Museum of American Art (as part of the 2008 Whitney Biennial), the Centre Georges Pompidou, Walker Art Center in Minneapolis, London’s Institute for Contemporary Art, The Kitchen in New York, REDCAT and LACMA in Los Angeles, MOCA Los Angeles, the 54th Venice Biennale, and the Smithsonian’s Hirshhorn Museum and Sculpture Garden, among others. The name “lucky dragons” is borrowed from a fishing vessel that was caught in the fallout from h-bomb tests in the mid-1950s, an incident which sparked international outcry and gave birth to the worldwide anti-nuclear movement. 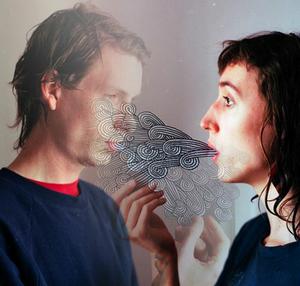