Ceaselessly innovative in a career spanning more than 30 years, Richard Pinhas is recognized as one of France’s major experimental musicians. A composer, world-class guitarist and electronics innovator, he is a key figure in the international development of electronic rock music. During the 1970s, Pinhas’ stature in France was analogous to Tangerine Dream’s in Germany. His band Heldon fused electronics, “diabolical guitar work” and rock to create a pioneering, aggressive music that was a precursor to the industrial music and techno to come. New electronic and digital artists and DJs are emulating Pinhas’ 70s work and incorporating it into their own. During the 90s, Pinhas began developing a system of electronic processing to use in performing live solo guitar concerts. Experimenting with tape loops and infinite delays, he expanded on, and transformed the “Frippertronics” technique Fripp used in his work with Eno. Pinhas’ work over the past decade, featuring his “Metatronic” system of electronically treated solo guitar compositions, is as radically innovative as anything in his early career.
http://www.richard-pinhas.com 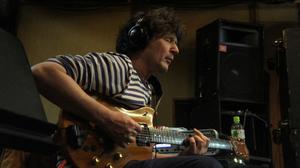