Mario Bertoncini (born 1932, Rome) is an Italian composer, pianist, and educator. In 1962 he was awarded the Nicola d’Atri Prize and in 1965 he was awarded both the Gaudeamus International Composers Award and the Fondation Europeènne de la Culture prize. Beginning his career as a concert pianist, he performed with symphony orchestras throughout Europe and North America and in Israel and Korea. He was a member of the improvisation group Gruppo di Improvvisazione di Nuova Consonanza from 1965-1973, serving as the group’s president from 1970-1972. From 1967-1973 Bertoncini taught at the Pesaro Conservatory. In 1974 he was made an Artist-in-Residence at the German Academic Exchange Service in Berlin where he created open air kinetic sound-sculptures for presentation at the Berliner Festwochen. In 1975-76 he worked on the music faculty of McGill University in Montréal. From 1980 until his retirement in 2004 he taught on the faculty of the Berlin University of the Arts. He currently resides in Cetona, Italy. 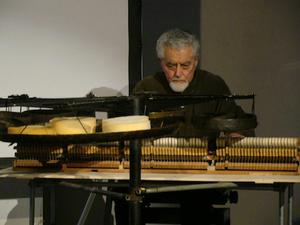