Stephan Mathieu (b 1967) is considered to be one of the most unique composers working in the field of digital and electroacoustic music today. His signature sound is largely based on period instruments, environmental sound, and obsolete media which are recorded and transformed by means of experimental microphony, re-editing techniques,and software processes involving spectral analysis and convolution. Paying close attention to detail and to the affecting content of the piece, Mathieu creates unique sonic experiences working with traces of the perceived reality.

His music, at the same time soft-paced and razor sharp, has been released on 18 CDs to critical acclaim, both solo and in collaboration with Douglas Benford, Taylor Deupree, Ekkehard Ehlers, John Hudak, Janek Schaefer and Akira Rabelais. Mathieu has created sound installations for the 4th century Aula Palatina at Trier and the 19th century ironworks Völklinger Hütte UNESCO world heritages and the Rosa-Luxemburg-Platz in Berlin.
www.bitstream.de 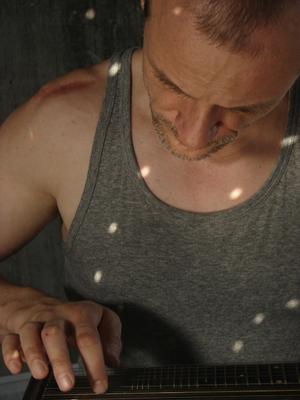