Cheryl E. Leonard is a composer, performer and instrument builder. Over the last decade she has focused on investigating sounds, structures and objects from the natural world. Many of her recent works cultivate stones, wood, water, ice, sand, shells, feathers and bones as musical instruments. Leonard uses microphones to explore micro-aural worlds hidden within her sound sources and develops compositions that highlight the unique voices they contain. Her projects often involve constructing one-of-a-kind sculptural instruments that are played live onstage. She is particularly interested in collaborating across artistic disciplines and developing site-specific works.Leonard holds a BA from Hampshire College and an MA from Mills College. Her music has been performed worldwide and has been featured on several television programs and in the video documentary Noisy People. 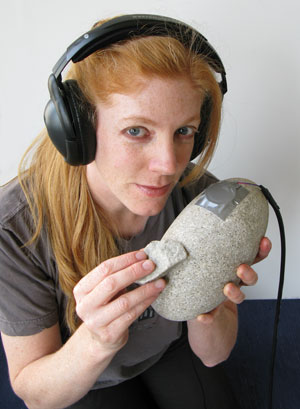