William Basinski is a classically trained musician and composer who has been working in experimental media for over 30 years in NYC and most recently, California. Employing obsolete technology and analogue tape loops, his haunting and melancholy soundscapes explore the temporal nature of life and resound with the reverberations of memory and the mystery of time. His epic 4-disc masterwork, The Disintegration Loops received international critical acclaim and was chosen as one of the top 50 albums of 2004 by Pitchfork Media. Art Forum selected The River, his transcendental 2-disc shortwave music experiment on Raster-Noton.de, Germany as one of the top ten albums of 2003. Installations and films made in collaboration with artist-filmmaker, James Elaine have been presented in festivals and museums internationally, and his concerts are presented to sold out crowds around the world. Basinski’s latest album, Vivian & Ondine, was released in December 2009 on 2062/USA and is distributed internationally. Most recently, Basinski collaborated with Antony of Antony and the Johnsons on the music for the new Robert Wilson opera, The Life and Death of Marina Abramovic which had its world premiere at the Manchester International Festival in July 2011 and toured Europe in 2012. His Disintegration Loop 1.1 was performed by the Wordless Music Orchestra in a world premiere performance on September 11th, 2011 at the Metropolitan Museum of Art, Temple of Dendur to a standing room crowd. The astonishing performance can be streamed at NPR.org. A recording is forthcoming. Disintegration Loop 1.1 and a world premiere of the new orchestral transcription by Maxim Moston of Disintegration Loop II was performed by the London Contemporary Orchestra at Queen Elizabeth Hall for the Meltdown Festival in London’s Southbank in August 2012. The music from his Melancholia album was featured in the soundtrack to Laurence Thrush’s movie, Pursuit of Loneliness, which had its World Premiere at the Sundance Film Festival in January 2012. Basinski’s works are distributed in Europe by DieStadtMusik.de, in the U.K. by CargoRecords.co.uk, in Japan by P*dis Distribution and in the United States by ForcedExposure.com.
Management: Danilo Pellegrinelli info@shaktimusic.ch, www.ShaktiMusic.ch 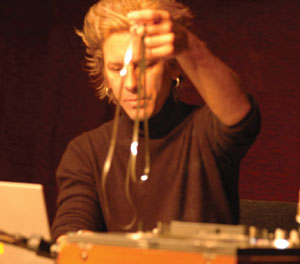