Born in San Rafael, California in 1955 and raised in Geneva, Switzerland, Christian Marclay moved to Boston to pursue his studies in sculpture at the Massachusetts College of Art. Initially influenced by Fluxus and Punk rock in the 1970s, Marclay began his exploration into sound through performances with phonograph records while he was still a student in 1979. In the 1980s he became an active figure in the New York downtown new music scene. He is considered a pioneer in experimenting, composing, and performing with records and turntables. Over the past 30 years, Marclay has explored the fusion of art and audio cultures, transforming sounds and music into a visible, physical form through performance, collage, sculpture, installation, photography, and video.

Marclay has collaborated with musicians such as John Zorn, Elliott Sharp, Zeena Parkins, Shelley Hirsh, Butch Morris, Okkyung Lee, Otomo Yoshihide, Arto Lindsay, and Sonic Youth among many others. He has performed in Asia, Europe, the United States, and Canada at such venues as the Walker Art Center in Minneapolis, the Sònar Festival in Barcelona, the Musée d’Art Moderne in Montréal, the Purcell Room/Southbank Center in London, the Philarmonie in Cologne, as well as The Kitchen, The Cooler, Roulette, Tonic, and The Knitting Factory in New York.

2007-2009 (approx 25 minutes)
This work is a slideshow created from Marclay’s photographs of onomatopoeias found primarily on signs, advertising, and product packaging. During a performance with vocalist Shelley Hirsch, for whom this piece was created, Marclay selects images to trigger her vocal improvisation and presents her with new images in an ongoing call and response improvisation.

2010
This vocal score was made using onomatopoeias found in Manga cartoons originally published in Japan but translated for the US market. These black-and-white serialized newsprint comics have been cut and collaged into a 60-foot-long handscroll. This type of scroll, which was invented in the 11th century, is considered the antecedent of the contemporary Japanese graphic novel. Having been stripped of their dramatic context, the sound effects are strung together into one long composition meant for interpretation by voice. 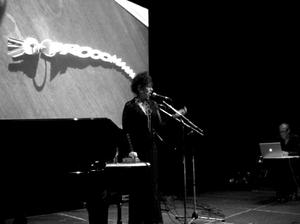