Yoshi Wada was born in 1943 in Kyoto, Japan, and graduated in 1967 from Kyoto University of Fine Arts with a BFA in sculpture. Soon after, he moved to New York City where he met George Maciunas and joined Fluxus of which he continues to be an active member. Wada studied music composition with La Monte Young, North Indian singing with Pandit Pran Nath, and Scottish Bagpipe with James McIntosh and Nancy Crutcher. In 1970, Wada began building homemade musical instruments and writing compositions for them based on his personal research into concerns of timbre, resonance, and improvisation with the overtone series. In more recent years, Wada has been active in exploring sound environments. His experiments with sound-generating devices, sculptures that make sound, site installations and computers offer audiences opportunities to consider what we hear, the way we hear it and what hearing means. 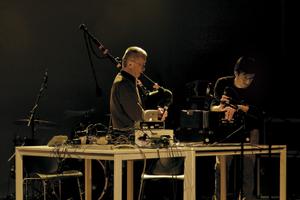