Gregg Kowalsky resides in Oakland, California where he completed a Master of Fine Arts degree in Electronic Music and Recording Media at Mills College. Kowalsky’s compositions range from drone and noise pieces to meditative psychedelia. His recent series of Tape Chants explores the acoustics where the performances occur by setting up cassette players around the space, using only the cassette players’ speakers for amplification. Kowalsky has had the opportunity to perform throughout Europe and the United States; participating in festivals such as WDR’s SoundArt-Köln Festival, Sonar, ERTZ Festival and the Ideal Festival among others. His recordings have released on Kranky, Rootstrata, and Important Records. He has composed for sound installations, film and acoustic ensembles.

“I will be performing a piece composed for electronics and jew’s harp. The jew’s harp will be re contextualized for the piece and act as an oscillator through the use of a pulse wave generator that forces the tongue of the jew’s harp rapidly move up and down on it’s own creating rich overtones. Other material used in the piece will be tuned to tuned to the jew’s harp. By slowly modulating the speed/tuning of the tongue, the jew’s harp creates rich overtones that should inhabit the space in which in the piece is performed. Overall, the piece will be a heavily meditative drone composition with psychho-acoustic phenomena, which is a reoccurring element in my work.” 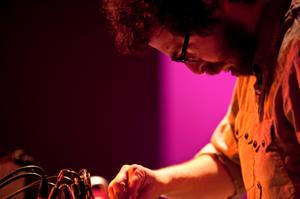