Erik is a composer and new media artist based in Providence, RI. Since 2002, Carlson has been composing and performing under the name AREA C, whose compositions work with timbre, texture and live loops, exploring sound through cyclical relationships and decay over time. In 2009 he received the Rhode Island Foundation’s MacColl-Johnson Fellowship in Music Composition, and in 2010 he was awarded the RI State Council on the Arts New Genres Fellowship. AREA C scored the feature-length documentary “Witness: Katrina” for the National Geographic Channel in 2010, and past releases have appeared on Sedimental, Last Visible Dog, Students of Decay and Sloow Tapes. The latest CD, “Map of Circular Thought,” was released by Preservation Records (Australia) in January 2011.

Carlson carries out parallel work as public and installation artist. He uses sound, video and light to examine the ways we interact with our built and natural environments, and to explore our relationships to time and memory. He recently completed a permanent public art installation titled “Cloud Seeding” for the Denver Public Library, and his interactive sound installation “Low Rez/Hi Fi,” can be viewed at 1110 Vermont Avenue in Washington, DC (a collaboration with architect Meejin Yoon). Carlson’s audio and installation work has also been supported by the NASA RI Space Grant Consortium and the LEF Foundation. 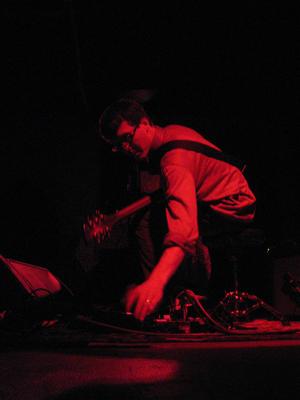