Max Mathews has been hailed as the “father of computer music,” for his programs, inventions, innovations, and ideas which are now so ingrained in computer music culture. Working at Bell Labs in 1957, Mathews wrote MUSIC I, the first widely-used program for sound generation. In 1961, Mathews arranged the accompaniment of the song “Daisy Bell” for an uncanny performance by computer-synthesized human voice, which inspired a similar scene for Kubrick’s “2001: A Space Odyssey”. The software Max (of Cycling74’s Max/MSP/Jitter) is named after him. Decades before these technology were widely accepted, he invented several electric violins and the Radio Baton gestural controller. Up to his last days, he continued as a leader in digital audio research, synthesis, and human-computer interaction always with a focus on performance, musicality, and mentorship.

“Computer performance of music was born in 1957 when an IBM 704 in NYC played a 17 second composition on the Music I program which I wrote. The timbres and notes were not inspiring, but the technical breakthrough is still reverberating.” - Max Mathews

Mathews directed the Acoustical and Behavioral Research Center at Bell Laboratories from 1962 to 1985, which carried out research in speech communication, visual communication, human memory and learning, programmed instruction, analysis of subjective opinions, physical acoustics, and industrial robotics. From 1974 to 1980 he was the Scientific Advisor to the Institute de Recherche et Coordination Acoustique/Musique (IRCAM), Paris, France, and since 1987 to his last days was Professor of Music (Research) at Stanford University. 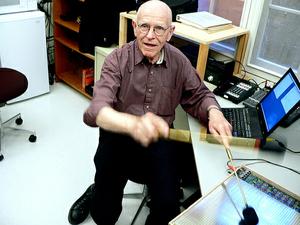