Her mostly solo performance pieces including the multimedia “O Little Town of East New York” and “For Jerry” (virtual duets with the late great Jerry Hunt) have been performed internationally at venues including Podewil (Berlin), WienerFestWochen (Vienna), The Kitchen (NY), The Whitney Museum (NY), and Experimenta Festival (Buenos Aires.

2007-2009 (approx 25 minutes)
This work is a slideshow created from Marclay’s photographs of onomatopoeias found primarily on signs, advertising, and product packaging. During a performance with vocalist Shelley Hirsch, for whom this piece was created, Marclay selects images to trigger her vocal improvisation and presents her with new images in an ongoing call and response improvisation.

2010
This vocal score was made using onomatopoeias found in Manga cartoons originally published in Japan but translated for the US market. These black-and-white serialized newsprint comics have been cut and collaged into a 60-foot-long handscroll. This type of scroll, which was invented in the 11th century, is considered the antecedent of the contemporary Japanese graphic novel. Having been stripped of their dramatic context, the sound effects are strung together into one long composition meant for interpretation by voice. 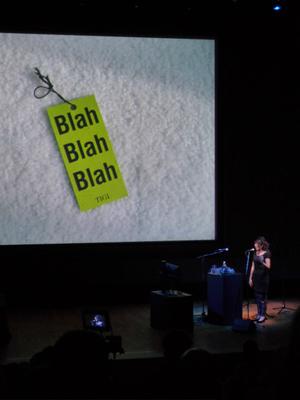